This stencil contains the 7 chakras divided over 2 stencil sheets.

The first one is Vishuddha. Closely related to Vishuddha is a small chakra, located in the roof of the mouth, called Lalana. It is described as having 12 red or white petals corresponding to the virtues of respect, contentment, insult, self-control, pride, affection, sorrow, depression, purity, dissatisfaction, honour and fear.

The second is Manipura. The position of Manipura is mentioned as being behind the navel or the solar plexus. Sometimes, when it is near the navel, there is a secondary chakra called Surya (sun) chakra near the solar plexus, whose role is to absorb and assimilate Prana from the sun.

The third chakra is Anja, or third eye chakra, is the sixth primary chakra in the body according to Hindu tradition. It is believed to be a part of the brain that can be strengthened through meditation, yoga and other spiritual exercises, just like a muscle.

The fifth is the Muladhara or root chakra, which is one of the seven primary chakras according to Hindu tantrism. It is symbolised by a lotus with four petals and the colour red.

The last chakra is the Svadhisthana chakra which has six petals, with the Sanskrit letters ba, bha, ma, ya, ra and la. The seed sound in the middle is vam. The tattwa for the element Water is represented as a silver crescent moon.
This chakra stencil can be used for various purposes such as for wall decoration, on furniture, as a cake stencil, hobby arts and much more. This is a reusable and child friendly stencil.

The second sheet contains a stencil of the Sahasrara chakra, also known as crown chakra. This chakra is generally considered to be the seventh primary chakra, according to most tantric yoga traditions. The crown chakra is the seventh chakra. Located at the top of the head, it gives us access to higher states of consciousness when we open up to what lies beyond our personal preoccupations and visions. The function of the crown chakra is to drive consciousness and bring us into contact with the universal.

The seventh chakra is referred to as:

The Sanskrit name “Sahasrara” is sometimes used to refer to the seventh chakra. It can be translated as “A thousand petals”.

How does it work?

1. Clean the surface to which you want to apply your stencil.
2. Place the stencil exactly where you want it and secure it with masking tape.
3. Cover the area outside the Stencil if necessary – you don’t want to get paint where you don’t want it!
4. Apply the paint.
5. Carefully lift the stencil straight up off your surface.

Tip: Make sure the stencil is completely dry before you put it back in its packaging!

Let us know what you think...

What others are saying

There are no contributions yet. 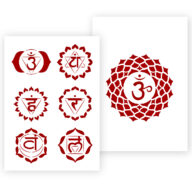