Since Banksy became famous, he has been the standard when it comes to stencil graffiti. He is the king of street art and – everyone wants him! Police, politicians and the press, art collectors and museums.

His pictures are provocative, humorous and political. They are placed, where no one expects them and address everyone. Those who, through all the wealth and daily grind, just forget that the world is not always likely, are reminded by Banksy, in his quite own way. Because he has been wanted by the police for years, he works and lives completely undercover. He doesn’t give interviews and only goes out in disguise to post his works. Nobody knows his real name and you can find numerous speculations about him on different web forums.

His art attracts a lot of media attention and helped him gain a worldwide reputation. Banksy turns politics into art and art into politics. Like no other, he brings abuses to light and places them in partly trivial contexts – to put a smile on people’s faces, without ridiculing the statement. Meanwhile, his works on canvas are trading up to 60,000 British Pounds in the art world.

At 240 pages, this book showcases all of Banksy’s must-see photos, installations and actions.

There are no reviews yet.

Be the first to review “Banksy: Wall and Piece” Cancel reply 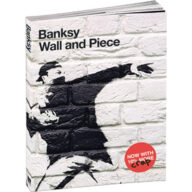